Near the beginning of 2015 I wanted to practice using traditional painting techniques in Manga Studio 5, so I made this series of fifteen paintings based on stills from season two of 'Mr Selfridge'. I've added notes for each one, detailing techniques I learned while painting them. Overall, I came to enjoy the process despite the struggle. For a detailed breakdown of how I painted the 'Agnes Towler' piece, you can see my post 'Using Traditional Painting Techniques Digitally'. Also, clicking on a painting will open a larger version on my DeviantArt gallery. 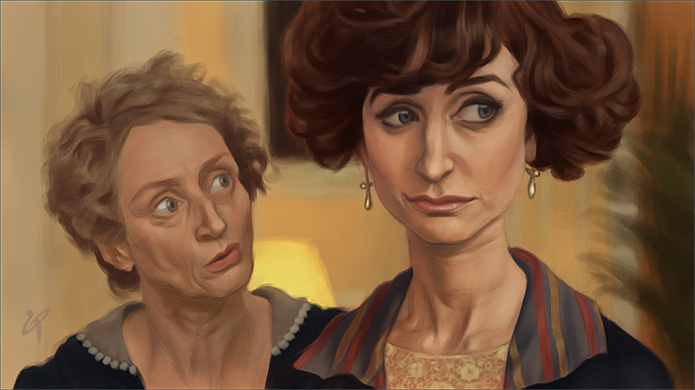 Selfridge's I (Mae and Pimble)
(Finished March 5, 2015) I had a lot of false starts on this one as I was trying to pin down a regular way of working. Though I'd been trying to simulate traditional painting techniques, I more or less gave up and color-blocked it, much like a comic book colorist or cel painter would. I then glazed the colors to harmonize them (using layers set to 'soft light'). I don't successfully use an underpainting until the ninth in this series (Kitty).

I also struggled with what to do with the line drawing. I like to keep it above the paint layers since I paint faster while it's visible. After this painting I resign myself to selectively lightening and erasing lines while I paint, by using a layer mask. The remaining lines become a part of the painting. 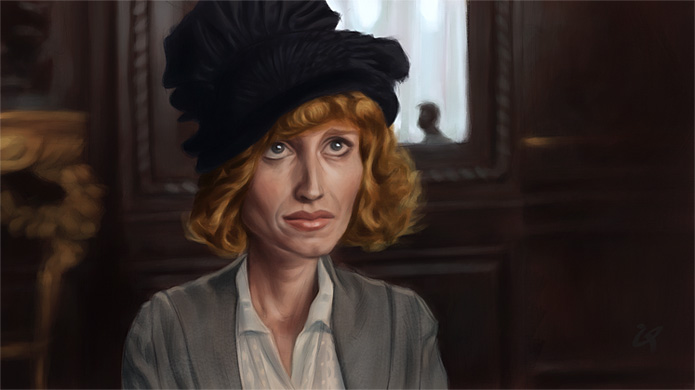 Selfridge's II (Valerie Maurel)
(Finished March 7, 2015) I color-blocked this one much like I did the first. I got in the habit of toning/glazing with Payne's grey and then Burnt Sienna on 'soft light' layers in lieu of an underpainting, which had the effect of deepening the shadows and color.

In addition to working on my painting process I also tried to develop my caricature skills. Some of the faces in this series become quite exaggerated, especially toward the end. 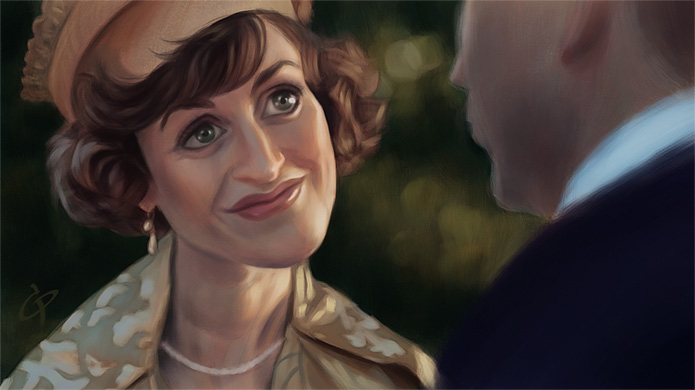 Selfridge's III (Lady Mae again)
(Finished March 11, 2015) I actually started with a Burnt Sienna underpainting on this one but it didn't work out as planned, forcing me to color-block parts on top. The underpainting shows through in the background though.

I also learned that I need to mark out compositional cues before I start exaggerating or else the face and anatomical proportions get too out of whack, usually shrinking like they did in the last one (Valerie Maurel). 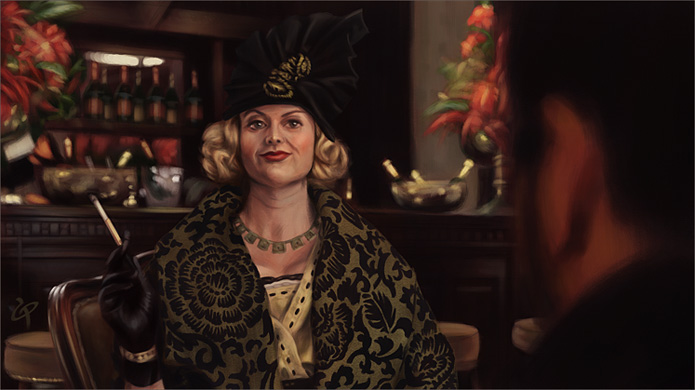 Selfridge's IV (Winifred Bonfils)
(Finished March 13, 2015) I had begrudgingly settled into color-blocking by this point. This particular piece gave me an opportunity to become well acquainted with Manga Studio's perspective ruler though, which is awesome. I had to take a very systematic approach to this piece due to all of the detail, which was good for someone like me who is usually too slapdash. 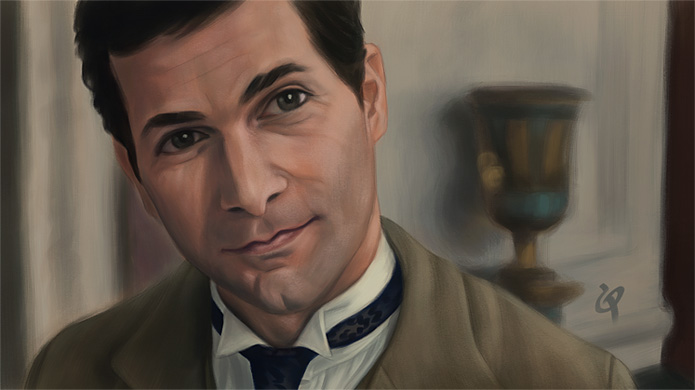 Selfridge's V (Henri Leclair)
(Finished March 15, 2015) Much like the first in the series, this one had some false starts as I was determined to try out new things. In particular, I tried using a more accurate color comp. For all of the previous paintings I had created a tiny color comp beforehand to prepare my color palette (the color comps can be seen below after the next piece). I like to use pure, bold colors in my color comp and then save the glazing/adjusting for later in the actual painting. I decided to glaze the color comp for this particular piece however and tried to paint the colors more directly. The background went swimmingly but the face was a disaster. I ended up starting over and then scrapping my new attempt, only to return to the first one. Turns out I simply need practice at painting large portraits, especially of men. Adjusting my brushes to give a drybrush effect for texture helped out a lot, both for his face and his coat. I tend to get lost in the details of large faces, overcomplicating them. I think I should have made a bolder attempt to exaggerate his features too. 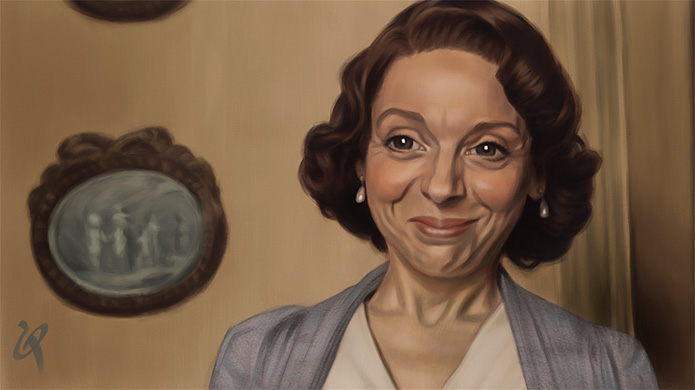 Selfridge's VI (Miss Mardle)
(Finished March 17, 2015) I love the skewed smile she had in this shot. This is one of my better subtly exaggerated faces. After this piece I start to obviously exaggerate features. I also continued my use of a more accurate color comp, encountering none of the problems I had on the last piece. Since I used Payne's grey and Burnt Sienna to adjust the color comp, I could get away with toning the actual painting with just black on a 'soft light' layer. I still glazed with Burnt Sienna and a few other colors for the face however. I tend to use Cadmium Red Light for the middle range of the face and a green such as Viridian for the lower part. 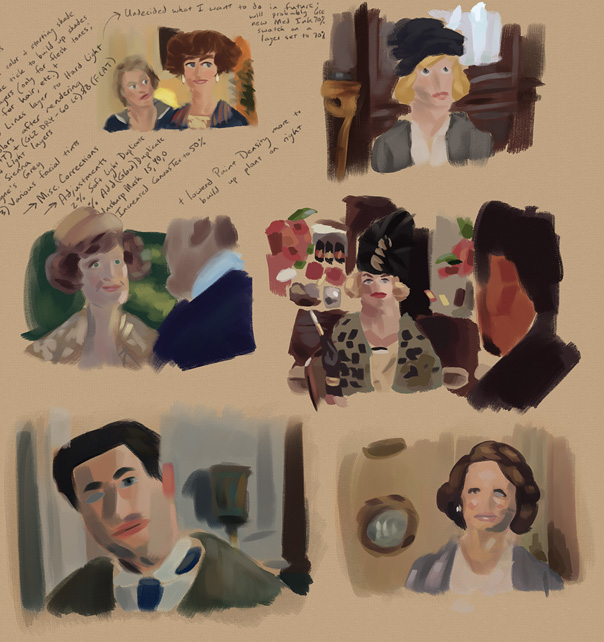 Color Comps
These are the small color comps I made for the first six practice paintings in this series. They turn out kinda funny looking since my only concern is creating a color palette. The bottom two were an experiment in 'pre-glazing' the colors to make a more accurate color comp, allowing me to paint the colors more directly with less need of glazing later on.

The text in the upper-left is just notes that were on the same layer as the first color comp. I make notes whenever I paint now to remind myself and/or clarify my thoughts. 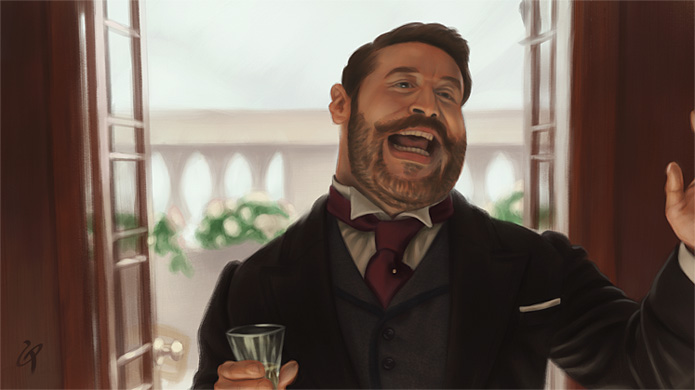 Selfridge's VII (Harry Selfridge)
(Finished March 17, 2015) Here, I made an obvious attempt to push the caricature of the portrait, instead of relying on my usual slapdash gesture drawing. I also stopped using color comps by this point, which was actually quite liberating (I was mainly practicing color comps for when I start inventing my own compositions, rather than painting from reference). I found that I had no more color problems since I took the time to pick the right color when I needed it, rather than resorting to the color palette I established in my color comp. (After I pick a color I always test it on the canvas before painting with it; it's impossible to judge if a color is right until it's next to the colors that will surround it.)

This is probably the first contre jour (strongly backlit) painting I have done from reference, which was fun. I ended up exaggerating the contrast in the figure to bring out details. 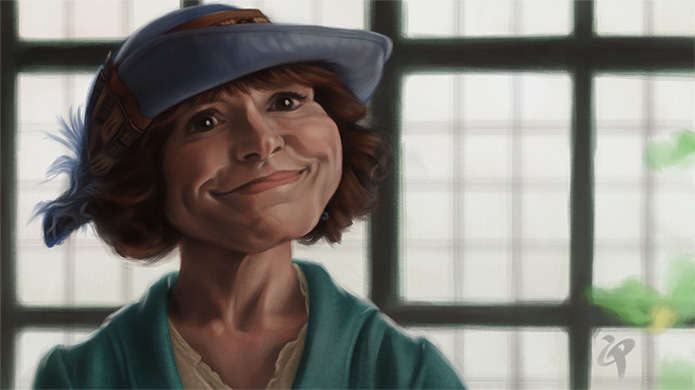 Selfridge's VIII (Rose Selfridge)
(Finished March 18, 2015) I tried to push the caricature of the portrait here, like in the previous painting, but I might have gone too far. As with the portrait of Henri Leclair, I struggled with the size of the face, getting lost in details. The actual painting was pretty straightforward however, and I used the parallel line ruler for the first time to help with the background. 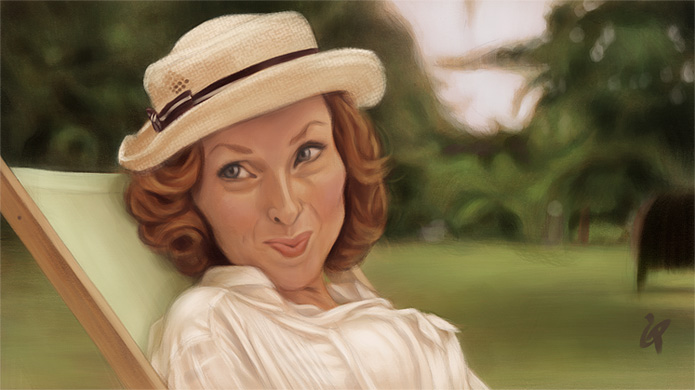 Selfridge's IX (Kitty Hawkins)
(Finished March 20, 2015) I used an underpainting successfully for the first time with this piece, partly because the reference suited it. The underpainting was done in a Burnt Sienna/intense orange and I used a textured brush to let it shine through. The underpainting really helped to tie the colors together, and imparted a soft glow. Kitty had a really strange lip shape to her expression which I didn't quite capture/exaggerate well. I ended up using the mesh transformation tool to help reign it in but I'm still ambivalent about it. 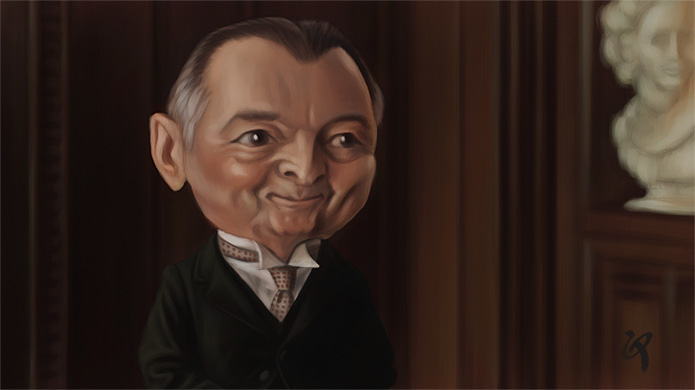 Selfridge's X (Mr. Crabb)
(Finished March 23, 2015) Although I like the inflated head and caricature, I failed to utilize an underpainting here, even after succeeding with the last piece. Ultimately, I ended up scrapping a lot of work and relied on color-blocking again. Fortunately I figured out a way to use an underpainting for darker color schemes in the next piece. 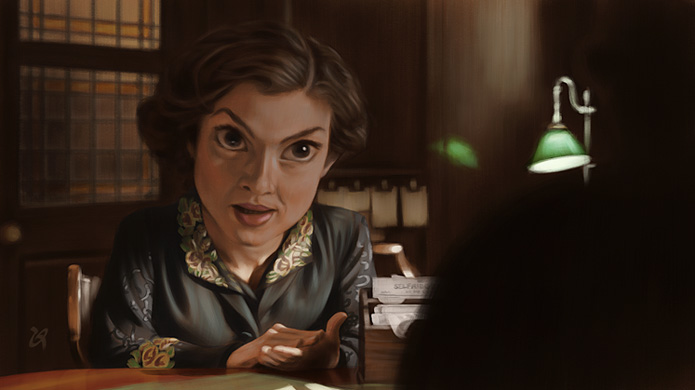 If you'd like to see a detailed breakdown of how I painted this piece, you can see my post 'Using Traditional Painting Techniques Digitally'.

Of course, color-blocking is nice to fall back on as it's simple to do digitally, especially for cartoony/comic book work. I think an underpainting yields a more unified, harmonious look however. 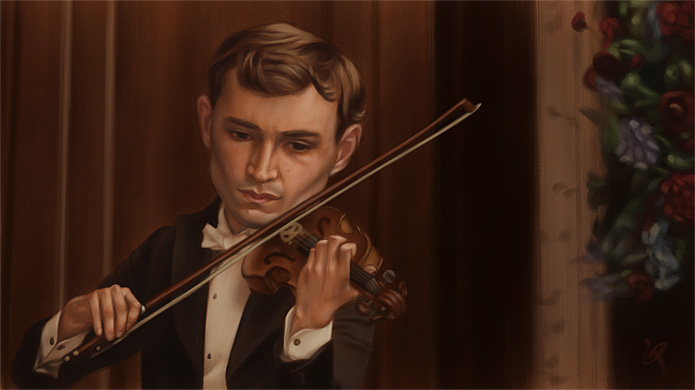 Selfridge's XII (Florian Dupont)
(Finished March 31, 2015) The violin almost killed me on this one. I had to alter the angle since my gesture drawing changed the pose slightly. Much torture ensued. For the painting, I used burnt sienna/intense orange on a tan ground for the imprimatura, and a darker burnt sienna for the underpainting.

I feel like this might have turned out a bit too 'tight', probably because I changed the pressure settings on my brushes. I'd like to try a more painterly approach with bolder brushstrokes, kinda like the flowers in the background. 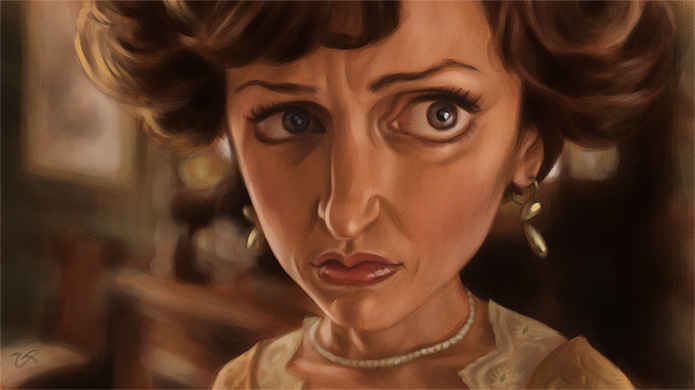 Selfridge's XIII (Lady Mae, yet again)
(Finished April 3, 2015) I had a really hard time with the sketch on this one. The angle and size of the head proved extremely difficult for me to exaggerate in the way that I had envisioned it. What eventually saved me was my SmudgeGuard. I hadn't really been using it before but now I'll probably always use it. Basically it let me draw more freely, sliding my hand on the screen (my Cintiq) and using my whole arm to get the gesture right. Turns out that being able to rest my hand on the screen and still freely use my arm also helps with fatigue, letting me paint longer. Without the SmudgeGuard there's more friction, and sometimes my hand sticks to the screen.

(If you'd like some tips on using a Cintiq, you can read my post 'Wacom Cintiq Tips and Suggestions'.)

As for the painting, it went pretty smoothly. I utilized the same underpainting technique that I used on the last painting, trying to be a bit bolder with my strokes. I ended up toning/glazing with Payne's Grey again toward the end to deepen the shadows (by cooling them down a bit). I've been struggling with how much to exaggerate the color and contrast. I always want to pump up the contrast a bit, especially since my paintings tend to turn out dark, but I also want to stay true to the reference. And it doesn't help that I'm trying to avoid Photoshop; Manga Studio is a bit more limited when it comes to image adjustments. For the next painting I use Payne's Grey ahead of time in the underpainting. 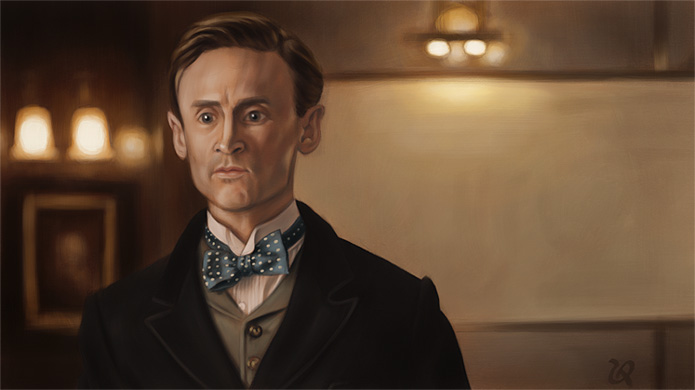 Selfridge's XIV (Thackeray)
(Finished April 5, 2015) I tried to pull back from the extreme caricatures on this one, even though Thackeray deserved a big head. I should have spent a bit more time on the sketch though. The underpainting was similar to the last few paintings, with the addition of Payne's Grey after using Burnt Sienna. The use of a contrasting cool color let me deepen the shadows prior to overpainting.

I'm still not entirely happy with the brushwork. I feel like I'm being too timid at times, particularly with faces. I think I need to define shadow shapes and core shadows more. 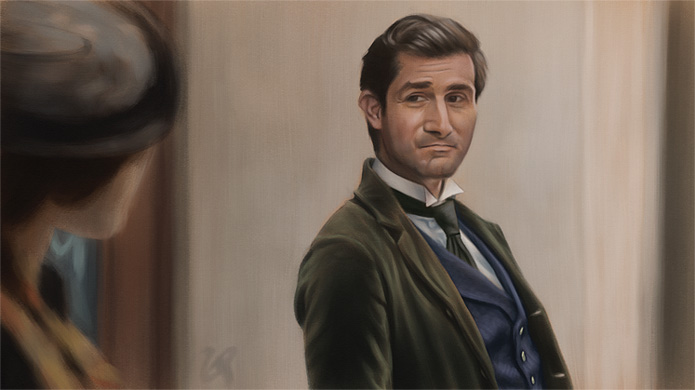 Selfridge's XV (Henri Leclair again)
(Finished April 14, 2015) I think this is the level of cartooniness that I'd like to aim for; just subtle exaggeration. I took a break to adjust my brushes and textures before painting this, and as usual, I ended up discarding many of the brushes that I thought I'd use. As a result, I had to repaint a couple areas, including the face, which I finally managed to paint in the same manner that I paint clothing - fast and loose. I find I paint much bolder when I don't concern myself with painting in the lines; after I finish an area I use a layer mask to erase any stray marks. Painting digitally is less precise than painting in real life, where you can bend the bristles of a brush to the exact shape and size you need with the twist of your hand.

Thanks for looking!
Posted by Geoff Priest at 12:32 PM